“Living, in the deepest sense, is something that nobody can do for us. At work you can substitute someone, but not when walking. That is the great criterion.”
Frédéric Gros

Nowadays
Cities are becoming larger, more dispersed and more fragmented. More and more people stop living the whole city, live in limited environments and look at the rest of the city as something strange.
We live in cities where the capitalist system designs them at their convenience. An example of this is the mobility; According to capitalism, a well designed city is one where priority is given to the circulation through the car, and they often forget to design the cities so that they can also be circulated through cycling and walking.
We live in cities that are designed without thinking about the encounter of the people as something important, spaces are not longer created so that people found, stays and dialogue, which leads to damage of the perception that people have of the world, limiting their knowledge and act in our societies.

Listen and Walk
Listening and walking are acts with which we come into contact with the world, help to make sense of it, understand it and share it with other people.
They can be actions capable of describing and modifying the spaces that are crossed, the mere presence of people in a space are already forms of “transformation of the landscape that, without leaving visible signs, culturally modifies the meaning of space and therefore the space itself.” [1]
Both listening and walking are political and social acts, vehicles of communication, dialogue, understanding and approach to people, an indispensable means of understanding and transformation of our realities.
We can listen and walk to stop producing, to consume, to leave the urgency and stress, to meet us, to know us – to ourselves and to other people- and so listen to us and walk together.
They may be acts capable of strengthen our relations, to put resistance against fear, violence and repression. Walk together (in a march, demonstration or walk) it can be considered an appropriation of public space and life itself.
In the current economic, political and social context, listen and walk can be seen as acts of resistance and rebellion against the capitalist system, because they slow down the hurried pace of our lives, invites us to stop us, to talk and get to know us, to think about us, our relationships and our societies.
“Where sound, body and space meet, new dimensions of, and sensitivities towards, environments can be engaged, and our relationship to these and to ourselves and each other within these can be re-imagined and transformed.” [2]

The everyday
Many actions such as dance, read, go out to party, stop to listen, walk, among others, can be everyday actions, however the everyday it is part of our way of being, is where we recognize ourselves, the others and our context. It can be considerer that in the everyday life we can put resistance against the prevailing political and economic system, because that is where they are generated actions that are not completely subjugated to the capitalist logic.

Action no. 1 *
This action took place in the downtown of Queretaro, Mexico, I walked the same route again and again for an hour, at the same time that was done the sound recording of each tour, which began and ended in the Garden Zenea. This action took place on Friday 2, October, 2015, between 19:18 and 20:18 hrs.

This action was published in Sonic Terrain: https://sonicterrain.bandcamp.com/album/str029-caminar-para-escuchar-escuchar-para-caminar-acci-n-no-1

Action no. 2 *
This action took place in the neighborhoods Cruz de Fuego and Magisterial, in Queretaro, Mexico, an attempt was made to walk the same route once every hour for 24 hours straight, at the same time that was done the sound recording of each tour, which began and ended outside of my house. This action took place on Monday 5 and Tuesday 6, October, 2015, it began at 9:00 hrs, however, at 1:00 hrs in the morning of Tuesday, when I did the tour, I met a couple of men in the corner of the street from my house, who they were smoking crack and drinking beer, and one of them became violent, fortunately nothing happened to me, but I couldn’t finish the action. I decided not to do the action again, I think that with the recordings made it was understood the idea, and at the same time serve as a witness to the violence that we live in Mexico.

This action was published in La Escucha Atenta: http://www.laescuchaatenta.com/publicaciones/-lea014-caminar-para-escuchar-escuchar-para-caminar-acci%C3%B3n-no-2-balam-ronan

Action no. 3 *
This action took place in the Historical Center of Queretaro, Mexico, I walked the same route at the same hour for one week, at the same time that was done the sound recording of each tour, which began and ended in the corner of the walker Mariano Matamoros with the Guerrero street. This action took place between days Wednesday 7 and Tuesday 13, October, 2015, at 19:00 hrs. 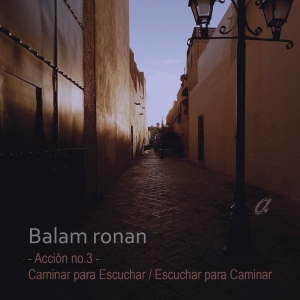 Action no. 4 **
This action con sited in walk in group the same route, at the same time, during a week, and write a small text where is describing the sounds heard and / or impressions and thoughts on the subject about each journey.
The journey took place in the Historical Center of Queretaro, Mexico, it started at 9:30 am in the Cinema Theater Rosalío Solano, and ended at the same place.
This action was carried out in collaboration with Ambar Luna and Jean-Paul Carstensen, through the project [Re] Post of Astrolabio I Investigación Escénica – http://astrolabio.mx/ 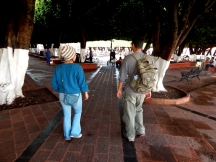 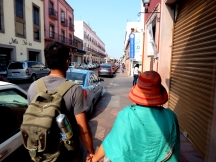 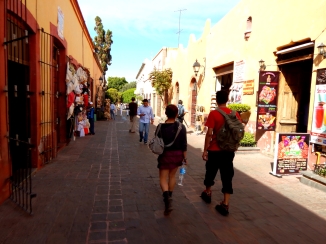 Action no. 5 *
This action consisted in walk the same path for three consecutive days at 18 hrs, one tour was done by car, another by bicycle, and another by foot, at the same time that was done a field recording of each tour.
The journey took place in the neighborhoods Jardines de la Hacienda and El Jacal, in Queretaro, Mexico.

Walk to Listen / Listen to Walk by Balam Ronan is licensed under a Creative Commons Attribution 4.0 International License.

One thought on “Walk to Listen / Listen to Walk”