Nowadays…
A large part of the society, politics and culture has been re-ordered under a single model, subordinated to the neoliberal economics and finance, where the only valid development is that of wealth through mass production, distribution and consumption. In neoliberalism the people, the social groups, the cultural differences, the economic inequality and the inequality of rights, matter less and less.
We have been invaded though an over saturation of visual and sound advertising through different means of communication. We have been invaded with its urbanism, which with its imposing roads, buildings and private spaces, helps to isolate the meeting and contact between the inhabitants of the city. The needs and lacks of the citizens are no longer taken into account. Through the media and urban design is encouraged the individualism, people are disconnected from the spaces that go through and from the other people. It fosters fear against the others, discrimination and censorship of those who are different.
Spaces have been created where there is no room for reflection and coexistence. The cities have been dehumanized, they have been placed at the service of economic and financial activity.

This is not the place to pout out all the problems that the country has gone through in recent years, however these are problems that affect us and that we have had to adapt to them in a forced manner. In a society that has been suffering so many problems in recent years, how can we be outraged, stand and change things? What can we do?, although I do not have conclusive answers, I think it is necessary to rethink our social fabric, our relations with other people, whether we know it or not; I think that it is necessary to be able to stop to talk(us) and listen(to us), give us time to reflect, to question, to fight and to create.

We have seen many movements and struggles that seek to improve the situation, and even many of us have even participated in these, are moment of interruption, catharsis and collective fascination, we perceive them as moments of rupture that very probably open new avenues for the improvement of our lives, however, when for some reason or other, those moments end, we realize that they did not work, at least not in the way we expected. I think that those moments are important, but maybe it is even more important to be aware that they have a short duration, and that the (re)appropriation and improvement of our lives is an every day task.
It is probably important (even urgent and fundamental) to see and listen to people who propose other ways of to produce, consume, dialogue, organize, make decisions… to live. Other ways to make that propose collaboration instead of competition, we instead of I. There are many other ways to do that propose other ways of live, but they involve to work daily, not wait for the next march, manifestation or movement. “I believe that the revolution is about changing our routine, day to day, spaces that are not important, those are the spaces that are going to transform the world, not the heroic actions, but it’s in those moments where we are only living and we have a routine where we can really make a change, and I believe that art has to register there, so I think it is important to stop thinking about art as something that only happens in museums, or which is fantastic or it is a spectacle, no, art is the simplest and most boring thing in life, and I think it deserves to be”. [1]
“Things happen on many levels, at many times and at different times. It is the time of the interruption, of the novelty, of the emotionality, of the collective… but there are also the moments of the invisible, the everyday, the continuous. There are moments of break, moments of last and continue, and also moments of antagonism and frontality. We have to learn to handle this multiplicity of logics, moments and spaces.” [2]

The everyday
Many actions such as dance, read, go out to party, stop to listen, walk, among others, can be everyday actions, however the everyday it is part of our way of being, is where we recognize ourselves, the others and our context. It can be considerer that in the everyday life we can put resistance against the prevailing political and economic system, because that is where they are generated actions that are not completely subjugated to the capitalist logic, where we can be ourselves, without having to produce and consume overwhelmingly, without having to dress, talk and behave as the system wants to.
I think that it is of the utmost importance “to be able to look at what is not seen, but which deserves to be looked at, the small, the tiny things of anonymous people, of the people that intellectuals tend to despise. That micro-world where I believe it really encourages the greatness of the universe, and at the same time be able to contemplate the universe from the keyhole, that is, from small things look at things that are bigger, to the great mysteries of life, to the mystery of human pain, but also to the mystery of human persistence, sometimes inexplicable, mania to fight for a world that is the home of all, and not the house of few and the hell of the majority, the capacity of beauty, the beauty capacity of the simplest people, who has an unusual capacity of beauty, which sometimes manifests itself in a song, in a graffiti, in a talk…” [3]
“It is in the inclusion of what strange or excluded where we will draw a new reconfiguration of the perceptible, of what is thinkable, modifying the territory of the possible.” [4]
“When the 15M argued that “we go slowly because we go far” was already a way of saying that we do not expect the revolution, the salvation or final judgment. We are already going. We know we do not want to live like this because we are already learning to live in a different way” [5]

Action no. 1
This action consisted in making field recordings every day and at the same time (at 18 hrs) for a year, simply was recorded what was happening at that time.

Action no. 2 *
This action consisted in making field recordings each hour for a day, since I woke up in the morning until I went to sleep at night. The recordings were made from 8 am on November 5th until 1 am on November 6th of 2015, a normal day in which everyday sounds are heard.

This action was published in Green Field Recordings: http://greenfieldrecordings.yolasite.com/audio-2016.php 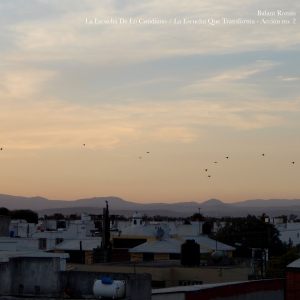 * Project beneficiary of the Support Program for Artistic Production “Apoyarte” 2015 of the Queretano Institute of Culture and Arts.

Listening to the Everyday / Listening that Transforms by Balam Ronan is licensed under a Creative Commons Attribution 4.0 International License.